Prior to his untimely death, our League Secretary Mike Stanley after consultation with his colleagues on the League Executive decided that it would be nice to recognise the efforts of our Warner Leisure Hotels representative Richard West in providing the league with sponsorship over a period of seven years.  Sufficient in amount to enable not only to meet the running costs of the League but also enable the League to provide a considerable amount of prize monies at the end of each season.

After some discussion it was decided to order a presentation Goblet, suitably engraved to thank Richard.  The Goblet arrived safely and remained with Mike but then fate interrupted the plans for the presentation by Mike's terminal illness. After the funeral, attempts were made to recover the Goblet, but during and after the clearance of his flat by family relatives the Goblet was not found amongst his possessions.

About six months ago Debroy Gregory, our Treasurer, received a phone call from the Goblet producer to say that he had had a strange phone call from a lady in Portishead saying that she had found a parcel left on her doorstep with his name on the outside.  So having found out her address Debroy went along to collect the parcel and discovered it was the Goblet.

On Sunday 30th January 2022 David Murley President, and Debroy Gregory Treasurer, presented it to Richard at Oxford & District IBC (see photograph) where we was playing a Wessex League match.  Needless to say he was pleased with the Goblet but also amazed at the story behind the occasion. 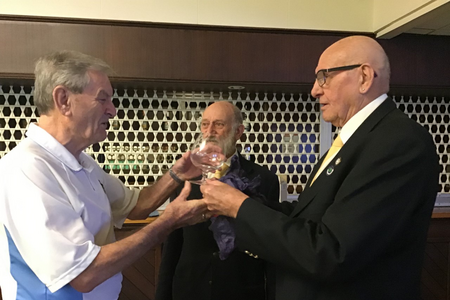