Wessex is the ancient kingdom of the West Saxons that defeated its rivals and created England. The counties of Somerset, Dorset, Wiltshire and Hampshire made up the original county.  The flag of Wessex depicts a Wyvern dragon.  The flag of the region of Wessex was registered on May 20th 2011. It is based on historic accounts of a golden dragon known as a “Wyvern”. This dragon battle standard represented the early kingdom of Wessex and by virtue of its use by the English army at Hastings, is often considered to have been England’s first national flag. 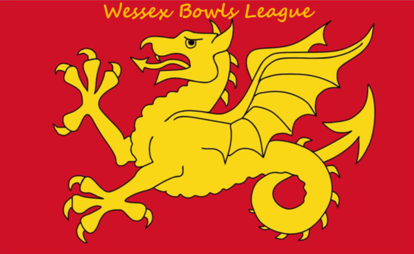 The Wessex Bowls League was founded in 1983 as a premier bowls league offering top class competition to major indoor clubs on a regular basis. It was run under the ever watchful eye of Mike Stanley who until recently was the only Secretary.  This role has now been taken over by Peter Stewart (see Officers tab for contact).

There are currently 53 clubs in the league spanning 12 counties and there are plans for further expansion. In 2018-9 we welcome Leicester; Tamworth; Chawton Park and a second team from Dorchester to the League.. The League has been reshaped and now comprises eight regions, each containing up to nine clubs stretching from Plymouth in the West to Rivermead in the East, Church Cresley in the North and Bournemouth in the South. Regional winners and runner –up qualify for the League play offs – the start of the knock out phase of the League Championship at the end of each season. (see Regions tab).

Other multiple winners were Bristol 4 times, Plymouth 5 times, Westlecot 4 times and Clarrie Dunbar 3 times. Probably one of the more memorable wins was that of Bentham who played in the famous bubble and the club of Maurice Webster.

Last season 2017-18 saw one of the League's new clubs Atherley win through to the Final beaten in the end by Bromsgrove.

If you take out the multiple wins then the other 14 clubs are widely spread throughout the league, each becoming deserved winners of a highly competitive league, second to none in England.

In the early years, the league enjoyed a sustained period of continuous sponsorship, kindly provided by the Bristol based Insurance company Sun Life. This generous sponsorship enabled the League to enjoy a comfortable period of consolidation free of any monetary worries and as a consequence its development went unhindered over the initial decade and the base was founded from which the League has grown to what it is today. The League has like many other leagues throughout the country struggled to find/retain sponsors over the years but on average have probably been more fortunate than others. There has been a few lean years, but with successful Treasurers the League has weathered them and come thru in tact and stronger for the experience.

The League is administered by an Executive Committee that consists of the Chairman, Treasurer and Secretary.  Each club has a delegate specifically for League matters and is a point of contact to enable the transfer of relevant information to each and every club.

The League has a fine set of rules, which in the main follow those of its model "the Denny Cup", with some locally developed rules added over the term of the league. These are administered in fair and even handed manner and there is a recently added appeals procedure which was developed over the past four seasons, which permits the League to police its own house within its own boundaries .

The Wessex League is currently in a sound position, and by its very existence and what it stands for is still attracting high class clubs to its membership, spreading and growing across the length and breadth of England. It has a pro-active Executive and a delegate from each club that communicates with the membership as and when it becomes necessary. This group of people will continue into the future to strive and improve the aura and esteem of the League as it moves forward into the next decade, in the hope that it will continue to prosper and develop.